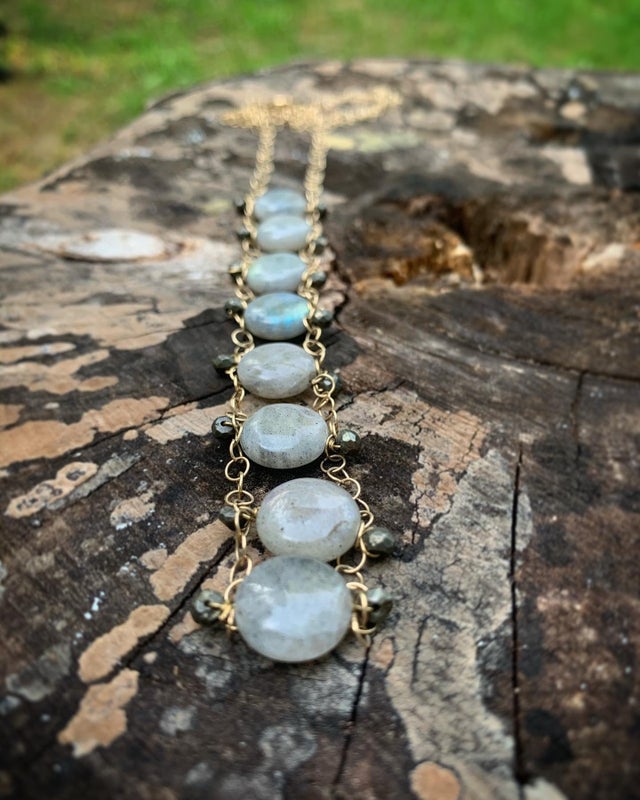 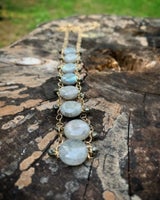 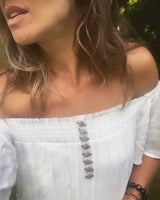 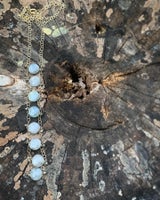 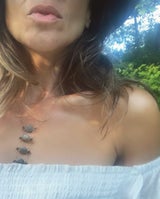 Wandering Star in Labradorite and pyrite on 14kgf

Wandering Star. Labradorite and Pyrite wandering in or out of site, all in a row.

14k gf chain and clasp, measures 20 inches at the longest point, but is totally adjustable. The drop is a touch over five inches beyond that.

From the Crystal Vaults about the stones:

Lore of the Inuit peoples claim Labradorite fell from the frozen fire of the Aurora Borealis, an ordinary stone that transforms to the extraordinary, shimmering in a mystical light that separates the waking world from unseen realms. It is, in every sense, a Stone of Magic, a crystal of shamans, diviners, healers, and all who travel and embrace the universe seeking knowledge and guidance. For self-discovery, it is excellent for awakening one's own awareness of inner spirit, intuition and psychic abilities.

Labradorite is also the most powerful protector of the mineral kingdom, creating a shielding force throughout the aura and strengthening natural energies from within. It protects against the negativity and misfortunes of this world, and provides safe exploration into alternate levels of consciousness and in facilitating visionary experiences from the past or the future.

Pyrite is often called “Fool’s Gold,” though there is nothing foolish about this mineral. Within its gleaming beauty is a stone of hidden fire, one that can be sparked to life by striking it against metal or stone. An Earth element, it also resonates with Fire energy, symbolizing the warmth and lasting presence of the sun and the ability to generate wealth by one’s own power. It is masculine in nature, a stone of action, vitality and will, and taps into one’s abilities and potential, stimulating the flow of ideas. It brings confidence and the persistence to carry things through to completion. [Eason, 180][Megemont, 150][Melody, 498][Simmons, 314-315][Ahsian, 315]

As a talisman, Pyrite is a unique protector, drawing energy from the Earth through the physical body and into the aura creating a defensive shield against negative energies, environmental pollutants, emotional attack and physical harm. It also supports one with a spirit of boldness and assertive action when protecting others, the planet, or in standing up for important issues of community. It stimulates the Second and Third Chakras, enhancing will power and the ability to see behind facades to what is real.

Sold out
Add to Cart
Proudly powered by Weebly